Tomorrow, Thursday April 17th at 10/9c, everyone’s Facebook and twitter feeds will be lit up with all things Scandal. A few weeks back, I wrote that Scandal’s season three finale is sure to be explosive. I was right on the money as Mama Pope literally activated a bomb at the end of last week’s episode, so now we know she’s been up to all season!

So pop that wine cork, grab a seat on the couch, and take a drink when: 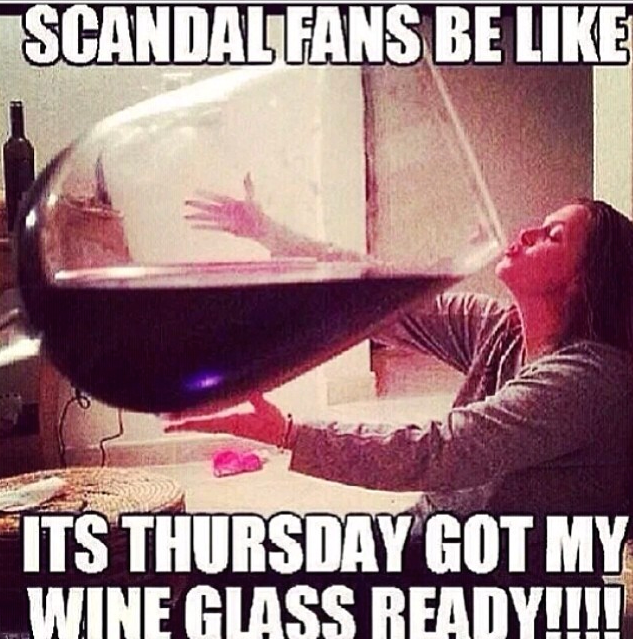 Olivia drinks a glass of wine

Olivia & Fitz get it on

Olivia & Jake get it on

Mellie and Andrew get it on
Last week’s episode ended with Andrew being in the location where the bomb is set to go off. However, I’m not ready to let go of Jon Tenney and the heat that he’s brought to the season so I believe that he will escape before things go boom.

Huck and Quinn get it on
No idea why this is happening, but no one is a fan.

Mellie gets drunk
Last week, the beautiful Bellamy Young was on a roll with the drink; her terrific boozy one-liners even started a #DrunkMellie trend on twitter.

Papa Pope gives a read
This season, he’s read everyone cover to cover and everyone is loving it! Joe Morton most certainly will receive a guest star nomination for all the of awards this year… Hate to say it, but all other male guest actors, and maybe female too, should just have a seat. #sorrynotsorry

We learn that Olivia and Harrison are siblings!
The Brolivia theory has been thrown around since season 2, even though the only random clue is that we know very little of Harrison’s background. However, Harrison asking Papa Pope if it was ok to call him Papa Pope last week was either foreshadowing or the writers just having fun with us die hard Gladiators.

Lastly, take a drink if you’ve screamed at the TV.
Scandal is known for messing with folks’ emotions, but your wine is here for you. Take a sip and relax.

As always, drink responsibly and have fun!! Tweet your favorite #Scandal moments and what’s in your glass to @HappyHourTour!

Source:scandalabc.tumblr.com
Posted by The Happy Hour Tour at 9:00 AM

The Happy Hour Tour
Jennie (JG) & Jessica (JB) are two ladies with a love of happy hour. Follow happy hour coverage of Chicagoland with Jennie and the wilds of Milwaukee with Jessica! We'll keep you posted like a post-it!

How did The Happy Hour Tour get started? Find out here!

We've been Featured On...

Cheers from the Midwest!

Cheers from the West Coast!

All text and photographs presented here are by Jennie Goosby & Jessica Bursi of The Happy Hour Tour unless otherwise credited. If you wish to use any of the work, please contact us at TheHappyHourTour@gmail.com to receive appropriate permissions.